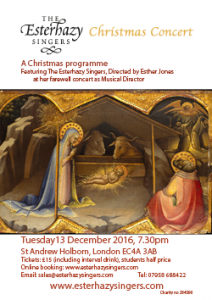 The Esterhazy singers performed their highly popular Christmas Concert at St Andrew’s, Holborn on Tuesday 13th December, under the baton of their new Music Director, Andrea Brown, who stepped in at short notice. The programme included Herbert Howells’ “Here is the Little Door”, and readings by Margaret Jowett, as well as 2 organ solos by James Gough, and carols for audience participation. Andrea demonstrated what an asset she will be to the choir by conducting a programme she had not chosen, to a high standard after a short rehearsal period. An emotional farewell and presentation was made to our previous MD, Esther Jones, who had been unwell leading up to the concert, but managed to come to hear us. It has been a wonderful 10 years with Esther, and we wish her, Seb and the children all the very best for the future.