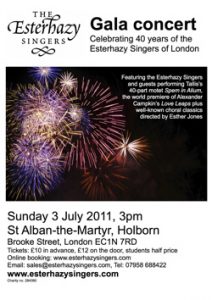 “An uninterrupted record of 40 years of singing is a remarkable achievement for an amateur choir which has always strived for professional standards,” said Esther Jones, Conductor of The Esterhazy Singers.

Music lovers and former choir members from the past 40 years were invited to join the choir on 3rd July 2011 in a joyous celebration of choral singing by performing Thomas Tallis’ unique work for 40 voices Spem in Alium. This work, because of its complexity, is seldom heard in concert venues. The concert also featured the World Premiere of a work by award-winning British composer Alexander Campkin commissioned by The Esterhazy Singers to mark their 40th anniversary.